The concessions cover an area of approximately 46,200 hectares located in the northern part of the Atacama Salar, in Region II of Chile. The concessions are adjacent to highway 23 which connects northern Chile with Argentina. 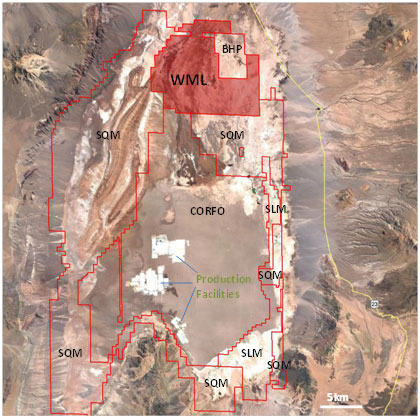 The Salar de Atacama is host to more than 15% of the world’s known lithium reserves, and yet exploration and production of lithium has occurred only in the southern portion of the Salar. The proximity of the Project to existing producers strongly suggests that exploration potential is good for the discovery of brines in the northern portion of the Salar, underlying the Project.

The geology of the Project is similar to the sedimentary settings of other salars such as Maricunga, La Isla, Olaroz, and Cauchari, where potentially economic lithium resources have been reported by other public and private lithium exploration companies. Regional studies of the Salar de Atacama’s geology, hydrogeology, climate and other factors provide a high-level of understanding of the lithium brine processes in the region, lending credence to the exploration potential of the Project.

Wealth Minerals intends to evaluate the brine potential of the Project by utilizing geophysical methods to better evaluate basin configuration, geologic structure, and the hydrogeology of the concessions, followed by drill testing any targets developed by the initial work.

The Atacama Salar is the World’s highest grade and largest producing lithium brine deposit, and currently produces approximately one third of global lithium output from two production facilities operated by Sociedad Quimica y Minera (“SQM”) and Rockwood Lithium. Atacama possesses a very high grade of both lithium (1,840mg/l) and potassium (22,630mg/l), has a high rate of evaporation (3,200 mm per year) and extremely low annual rainfall (15mm average per year). These characteristics make Atacama’s finished lithium carbonate easier and cheaper to produce than its peer group globally. A key factor in lithium production costs is evaporation time and Atacama Salar’s evaporation rate is the highest in the lithium industry.