Figure 1. Gossanous weathering semi-massive pyrite-chalcopyrite-bornite-sphalerite-galena with heavy hydrozincite crust in upper sphalerite-bearing layer (1A) and the sulphide horizon looking northwest along strike (1B).

In conjunction with the discovery, the Company is announcing a flow-through non-brokered, private placement offering of up to 6,814,814 units in the capital of the Corporation (the “Units”), for the subscription price of $0.27 per Unit for gross proceeds of up to $1,840,000, with each Unit consisting of one “flow-through” common share (each, an “FT Share”) in the capital of the Corporation within the meaning of subsection 66(15) of the Canada Income Tax Act (“ITA”) and one-half of one “non-flow-through” common share purchase warrant (each whole warrant, a “Warrant”), with each Warrant entitling the holder thereof to purchase one non-flow-through common share in the capital of the Corporation (each, a “Warrant Share”) at an exercise price of $0.40 per Warrant Share for a period of 24 months (the “Flow-Through Offering”).

The proceeds of the Flow-Through Offering are expected to be used to incur eligible “Canadian exploration expenses” that will qualify as “flow-through mining expenditures” (within the meaning of the ITA) related to the Kootenay Project for renunciation to the subscribers under the Offering.

Closing of the Flow-Through and Non-Flow-Through Offerings are subject to the approval of the TSX Venture Exchange.

The securities offered have not been and will not be registered under the United States Securities Act of 1933 (the “U.S. Securities Act”), as amended, or any applicable state securities laws and may not be offered or sold in the United States or to “U.S. persons”, as such term is defined in Regulation S under the U.S. Securities Act, absent registration or an applicable exemption from the registration requirements. This news release shall not constitute an offer to sell or the solicitation of an offer to buy nor shall there be any sale of the securities in any State in which such offer, solicitation or sale would be unlawful.

The Kootenay nickel-copper-zinc-gold property in southeastern British Columbia (the “Kootenay Project”) comprises two separate claim blocks including the Lardeau-Goldsmith claim block, covering 6,951 hectares, and the Ledgend claim block covering 1,728 hectares. The claims cover precious and base metal prospective lower Paleozoic greenstone and phyllite units within the Lardeau Group, which hosts Besshi-type volcanogenic massive sulphide (“VMS”) deposits north of Revelstoke. On August 17, 2022, the Company announced the results of recent geophysical studies (“Studies”), including the analysis of a completed VTEM survey that covered the north end of the Ledgend property, an area of very poor historical data coverage, but prospective stratigraphy (Figure 2). Two significant, highly conductive electromagnetic (“EM”) anomalies occur on the eastern edge of the geophysical survey grid and on strike with Ni-Cu-Zn soil and magnetic anomalies to the south. The strong conductors, with conductivity-thicknesses (“CTs”) of >300 siemens, were interpreted by geophysicist Martin St. Pierre to be shallow (Northeast target) and outcropping (Lost Ledge target) massive sulphides. 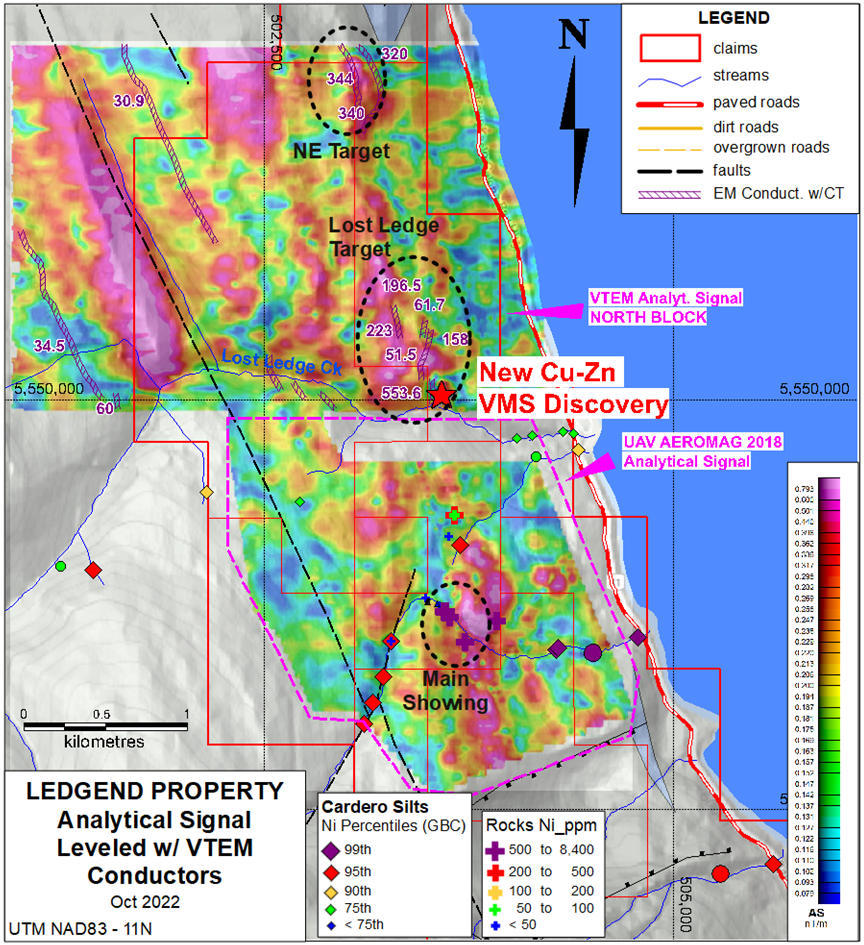 Since the August 17, 2022, announcement, the Company’s geological team conducted a site visit to field-check the geophysical anomalies. At the Lost Ledge target, at the south edge of VTEM survey, geologists identified a previously undocumented outcrop of massive sulphide that extends for 30 metres along strike. At the southeast end, the phyllite-hosted layer is 6-metres thick and open in that direction, and tapers to between 1-2-metres thick at the northwest end, where it is also open along strike. Sphalerite, hydrozincite, chalcopyrite, bornite and pyrite were visually identified in the outcrop (see photos in Figure 1). Five chip samples, from one to three metres long, were taken across the layer at both ends and have been submitted to ALS Labs, Vancouver. Follow-up channel sampling utilizing a saw is planned for the following week, as well as tracing the horizon southeast into Lost Ledge creek. Also, further trail cutting will complete access to the northeast EM anomalies, which remain unvisited.

John Drobe, P.Geo., Wealth’s Exploration Manager and a qualified person as defined by National Instrument 43-101 Standards of Disclosure for Mineral Projects, has reviewed the scientific information that forms the basis for this news release, and has approved the disclosure herein. Mr. Drobe is not independent of the Company as he is a consultant and shareholder of Wealth and holds incentive stock options of the Company.

The Company opportunistically advances battery metal projects where it has a peer advantage in project selection and initial evaluation. Lithium market dynamics and a rapidly increasing metal price are the result of profound structural issues with the industry meeting anticipated future demand. Wealth is positioning itself to be a major beneficiary of this future mismatch of supply and demand. In parallel with lithium market dynamics, Wealth believes other battery metals will benefit from similar industry trends.