The resource estimate is based on Wealth’s geophysical survey and the 2022 drill program, which consisted of four vertical holes for a total of 1,111m in length. Hole depths varied from 194m to 350m. All the holes encountered brine, with the top of the brine level at 150m to 200m below surface. All holes ended in brine. The Montgomery resource estimate also includes drilling and geophysical data from previous operators on the Project. The technical report will be filed on the Company’s website and SEDAR within 45 calendar days of this disclosure.

Wealth CEO and Director, Henk van Alphen, stated; “It gives me great pleasure to announce our maiden resource at Ollagüe, which is a major milestone for our Company. We will now commence the next phase of development planning, engaging with our prestigious international engineering partner FLSmidth to prepare a scoping study. Additionally, our geological team is already planning how to best expand the resource and raise the category of the resource in our next drilling campaign.”

“The Ollagüe Project is well suited for lithium production because of its favorable permeability, resource size and expansion potential. Indeed, in terms of LCE resource size, the Ollagüe Project now ranks among its peers in terms of a potential future operation. Consultations with our numerous technology and engineering service providers leads us to conclude that the Ollagüe lithium brine is well suited for Direct Lithium Extraction technology (“DLE”).”

Mr. van Alphen went on to emphasize the local community support received, stating “I also want to thank the Indigenous Quechua Community of Ollagüe for putting their trust in us, and I look forward to working with them in the future. It is an exciting time for our Company and all stakeholders!”

Notes to the Indicated and Inferred Resource Estimate Table:

Salar de Ollagüe is located in the Andes belt in northern Chile on the border with Bolivia. One of the most important characteristics that defines the region is the presence of evaporitic basins or “salars” where important deposits of borates and sodium sulfate can occur and where lithium can concentrate in brines. 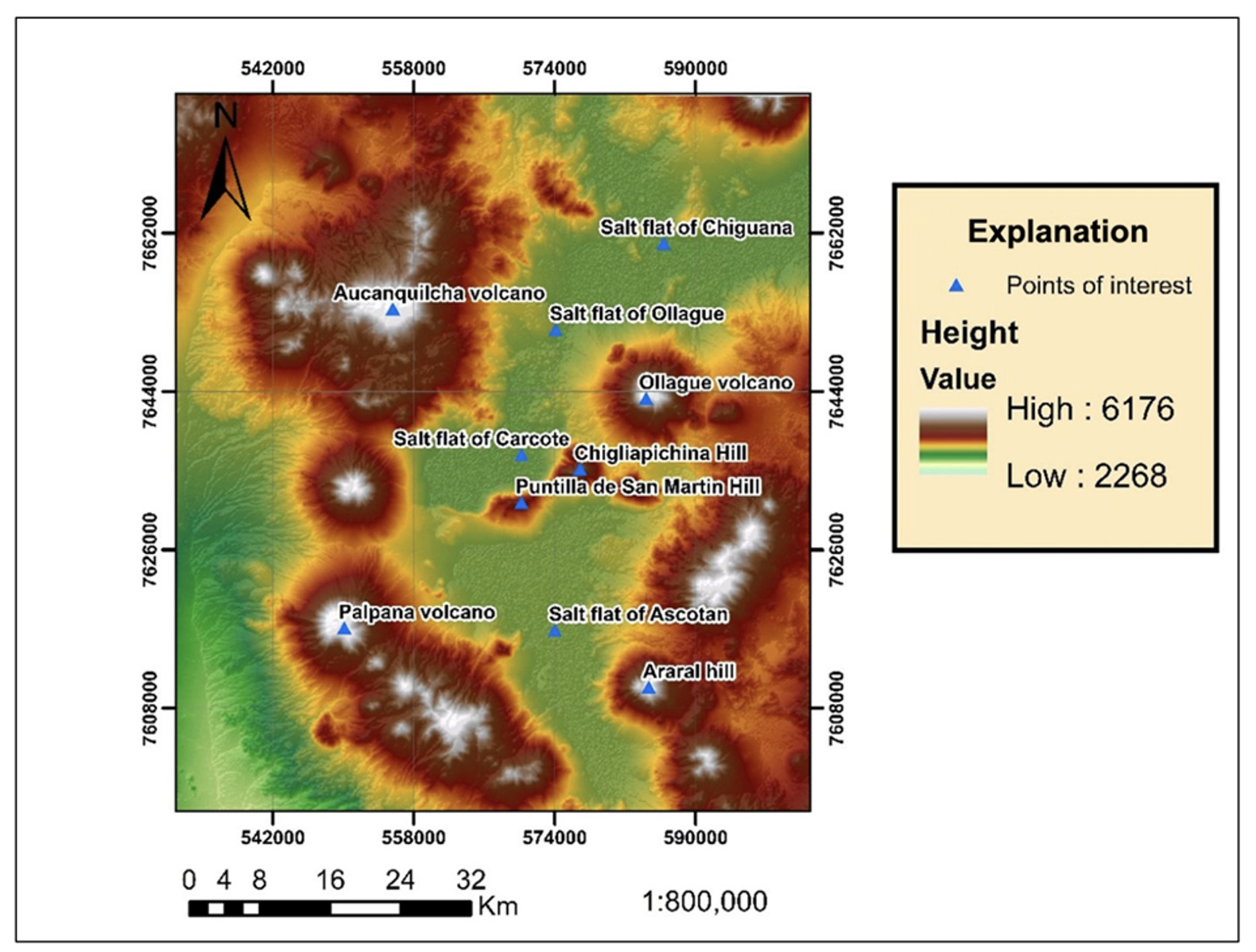 The oldest unit in the area corresponds to andesitic stratovolcanoes, highly weathered in both the eastern and western belts and surrounded by modern lava centers. The radiometric age K-Ar indicates a range from 15 to 8 million years ago (m.a.).

Younger strata volcanoes and volcanic flows of andesitic and dacitic composition also occur in the area. In some areas, porphyritic dacitic domes occur. The domes show flattened shapes with abrupt edges due to high lava viscosity. The craters of the volcanoes have not been strongly affected by weathering. The principal volcano in the area is the Ollagüe volcano, with a conical shape composed of gray, pyroxene-rich andesitic lavas and pyroclastic sequences.

Unconsolidated deposits are distributed throughout the area. These are interbedded with saline deposits and cover many of the older units in the area. These deposits are composed of different types of sediments, including alluvial and fluvioglacial sediments, moraines, lahars, and pyroclastic deposits. It is estimated that the age range is Lower Pleistocene-Holocene.

The youngest units in the area are the evaporites which include calcium and sodium sulfate minerals, calcium carbonate, sodium chloride, lithium and borates. These deposits are continually being formed, so they are considered to be the most modern deposits in the area. The Ollagüe Project is part of this unit.

Conceptual Model of the Ollagüe Basin

Based on the available information, the Salar de Ollagüe appears to be an immature or intermediate salar. Basin margins are interpreted to be fault controlled.  The margin of the basin is dominated by volcanic units.  Depth to bedrock is interpreted to be more than 300 meters below the land surface based on the drill hole sample and geophysical surveys.  Additional studies are required to accurately delineate basement depth.

Based on exploration drilling, the upper part of the system consists mostly of clastic sediments saturated with freshwater/brackish water. The thickness of this upper part was variable in the central, western and eastern areas of the salar. At depth, brine was encountered below about 150m, also in clastic sediments.

The principal sources of water entering the Project area are from surface water coming into the basin from the basin margins. To date, surface water flow has not been formally measured. Some groundwater inflow from natural recharge along the mountain fronts via alluvial fans is also believed to exist. In both cases, there appears to be limited mixing of the fresh water and brine in the basin due to density differences. Evaporation of fresh water in the basin over time results in concentration of the dissolved minerals and ultimately results in brine generation.

The mineral resource estimate for the Ollagüe Project was prepared to industry standards and best practices by Michael J. Rosko, MS PG, an Independent QP for the purposes of NI 43-101. The mineral resource was estimated by constructing polygonal blocks surrounding wells, divided into horizontal layers by hydrogeologic units. The resource model includes discrete-depth data points, such as drainable porosity determined on core and depth specific samples for brine chemistry. Drainable porosity estimates were also assigned based on the field lithologic descriptions (non-laboratory). Results from the TEM geophysical survey were considered regarding the overall understanding of the stratigraphy of the hydrogeological units, and for identifying areas of likely brine aquifer, including those deeper areas not penetrated by exploration drilling.  The total area of polygon blocks used in the resource is 63.38 km2. The initial resource calculation for the Ollagüe project consists of an Indicated and Inferred resource estimate. 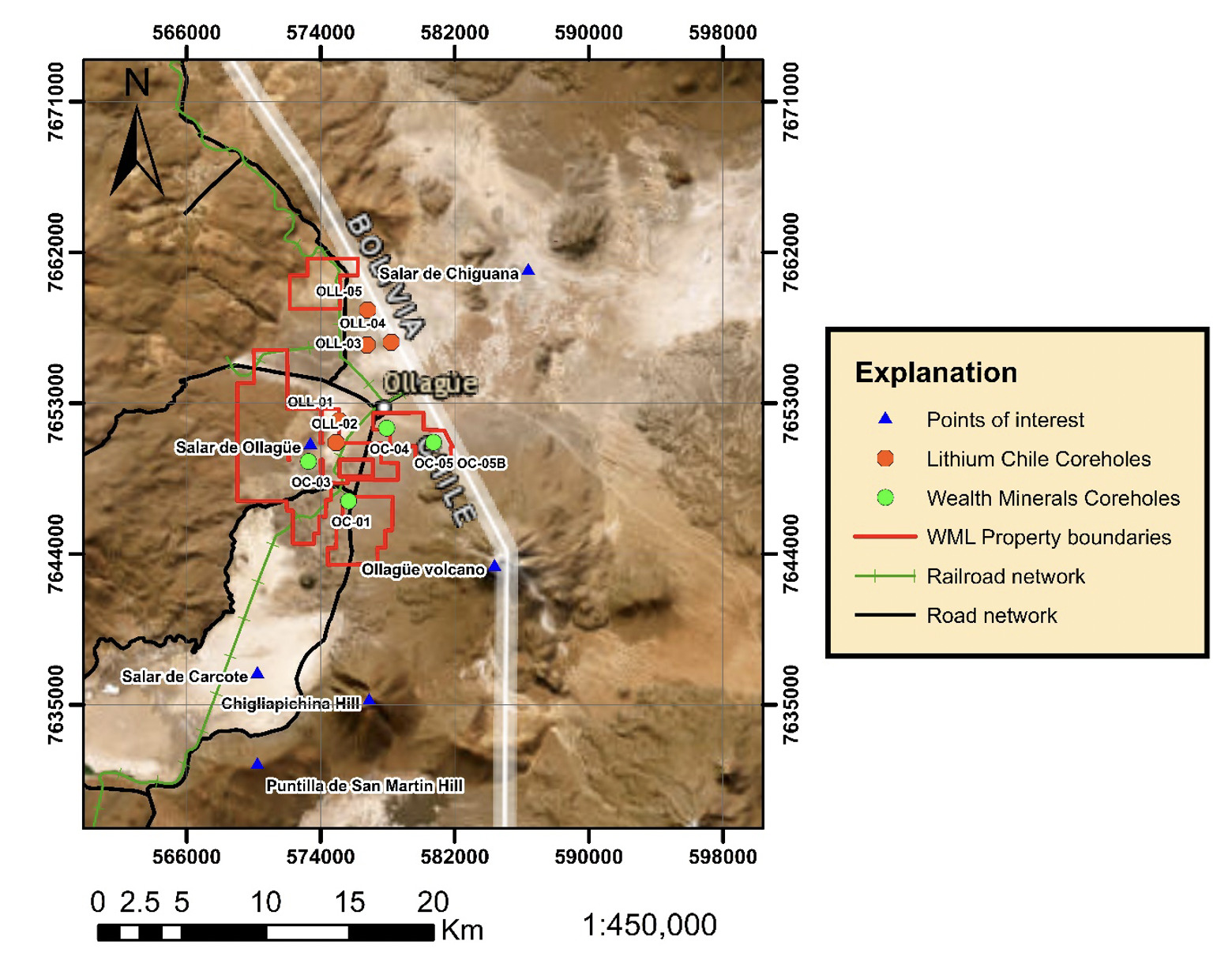 The drilling contractor for the corehole exploration hole program was Terraservice S.A., based in Santiago, Chile.  All of the corehole exploration holes were drilled using diamond drill hole (DDH) methods with mud.  Drilling fluid was polymer-based.  Core samples were described and stored in labeled plastic core boxes. The data from the corehole material was combined with previous Wealth geophysical surveys and historic data to make an initial resource calculation, see Map 2.

The Indicated and Inferred resource estimates will likely change as more information becomes available. The 2022 program has substantially increased the understanding of the conceptual model of the basin and has allowed the estimation of this initial lithium resource. In some areas, deeper drilling may confirm lithium brine in the deeper parts of the aquifer, and add to the resource, especially given that the lithium-rich brine is located in the deeper part of the basin. Additional characterization in the northmost concessions of the Project could also add additional Indicated or Measured resources.

The Mineral Resource Estimate in this release has an effective date of December 31, 2022 and was prepared by Mr. Michael J. Rosko, MS PG in accordance with NI 43-101. Mr Rosko is Operations Manager of Montgomery & Associates Consultores Limitada (a wholly owned subsidiary of Montgomery & Associates) and is an independent Qualified Person (“QP”) as defined by NI 43-101 guidelines. He participated in the preparation of this press release and has reviewed and approved the technical content.

Sample collection, preparation, analysis, and security apply to samples obtained during exploration drilling and sampling programs.  Samples were bottled on site; paperwork was completed in the field.  Field parameters, including temperature, electrical conductivity, and pH, were obtained for the samples and recorded.  All samples were labeled with permanent marker, sealed with tape, and stored at a secure site, both in the field and in Ollagüe, Chile.  Montgomery and Wealth personnel personally delivered the samples to ALS Laboratory in Antofagasta, Chile.

As part of the due diligence and confirmatory process, Michael Rosko (Author and independent QP) visited the Project site (Salar de Ollagüe) on August 03, 2022. During his visit, Mr, Rosko observed and verified drilling and sampling activities conducted at exploration well OC-01. Also, he visited locations of all corehole exploration wells drilled during the campaign.

All samples collected in the Ollagüe project area are currently stored in Ollagüe, Chile, and is being managed by Wealth.  Data were reviewed after entry into the database.  The QP has verified the drainable porosity and chemistry data used for the resource estimates given in this report.

The Company opportunistically advances battery metal projects where it has a peer advantage in project selection and initial evaluation.  Lithium market dynamics and a rapidly increasing metal price are the result of profound structural issues with the industry meeting anticipated future demand. Wealth is positioning itself to be a major beneficiary of this future mismatch of supply and demand. In parallel with lithium market dynamics, Wealth believes other battery metals will benefit from similar industry trends.