Wealth believes the metavolcanic and metasedimentary units of the southern Lardeau Group to have excellent potential for hosting volcanogenic massive sulphides (VMS) with significant nickel-cobalt (± copper-zinc) content. These deposits have relatively small footprints and the other known VMS occurrences in the belt were either discovered in areas of good rock exposure, at high elevations, or by chance during construction of forestry roads. The heavily vegetated low-elevation regions are under-explored, and few previous workers recognized the potential for nickel-cobalt mineralization. Past exploration has focussed on lead-zinc- silver replacement and silver-gold vein deposits.

The Lardeau claim covers some of the most prospective of the anomalous nickel-cobalt regional silt anomalies produced by the regional sampling programmes of the B.C. Ministry of Mines. More details on each project are available at www.cardero.com.

Note that the exploration results described here for the Kootenay Project are preliminary in nature and not conclusive evidence of the likelihood of a mineral deposit.

The first documented occurrence of nickel-cobalt bearing massive sulphides in the region was the Ledgend massive sulphide showing, discovered by prospectors in 1981 during construction of a logging road. The showing was not subsequently staked until 1997. The mineralization was described in 1998 by the B.C. Geological Survey as outcropping massive pyrrhotite with nickel and cobalt minerals. The geologist noted that the mineralized horizon could be traced over hundreds of meters along strike. Subsequently largely overgrown, in 2016 the new owners relocated float from the discovery outcrop and grab sampling returned values of 0.15 to 0.76% nickel and 0.01 to 0.09% cobalt, as well as up to 0.53% chrome and anomalous copper and zinc. Subsequent work in 2016 included soil geochemistry covering an area 500 by 1600 metres at 25 metre spacing on 100 metre lines. This generated a nickel-cobalt anomaly 800 metres in length extending to the southeast of the showing, with the peak of the anomaly (values up to 0.84% nickel) located on a steep slope about 200 metres southeast.

In 2016 and 2017, two soil grids 1.8 kilometres apart were completed over the southern 2/3 of the claim block. (the “North” and “South” grids). The 1,218 soil samples produced significant anomalies for follow-up work in 2018, mainly in the North Grid. In addition, an outcrop near the original discovery was cleaned and chip sampled perpendicular to layering/foliation, returning 4 metres of 0.22% Ni and 161ppm Co, with a one metre sample running 0.39% Ni and 0.028% Co. A 20-30cm layer of massive to semi-massive pyrite-pyrrhotite occurs between an upper horizon of siliceous biotite schist and lower horizon of talc-tremolite schist. True widths should be close to sample widths, but might vary significantly along strike due to the tight, overturned folding.

A conformable and probably syngenetic horizon of manganiferous exhalite is associated with the massive sulfides located to date. Sampling intermittently traced this horizon throughout the length of the soil grid and beyond, from at least 400 metres to the north to some 4,500 metres to the south, where similar conformable sulfide mineralization occurs along a road cut. Chip sampling ICP results of the Creek Outcrop, with layer of semi-massive sulphide considered the source of the float at the Ledgend discovery showing. Sample of massive pyrrhotite-pyrite from the Ledgend discovery showing.

In May 2018, approximately 90 line kilometres, or 375 hectares, of drone (“UAV”) airborne magnetometer geophysics was flown in order to trace the sulphide horizon. The survey successfully outlined the favourable horizon as a strong analytical signal anomaly over 1200 metres in length, coincident with Ni, Co and Cu soil geochemical anomalies, and open to the south. Ten hand-dug trenches were excavated across the Property to test the stronger soil/geophysical anomalies, concentrating on the high-priority Central Zone and East Zone. While the shallow trenching failed to uncover more massive sulphides, sampling of deeply weathered gossanous units and a siliceous, chrome-rich horizon indicated significant potential for deeper semi-massive sulphides. Gridded soil Ni values next to UAV aeromagnetic map, with trenches completed in 2018

Exploration at Ledgend will continue with prospecting, silt sampling and airborne geophysics over the northern portion of the claim block. The entire northern third of the Ledgend claims has no geochemical sampling or mapping, though the favourable geologic units and geochemical anomalies all strike into the area from the known massive sulphides to the south. Proposed aeromagnetic and silt sampling coverage for the northern third of the Ledgend claim block.

The mineralization at Ledgend is hosted by northwest-trending, tightly folded sericite and biotite schists, quartzite, and talc-tremolite schist of the Index Formation, a member of the Lardeau Group. Graphitic and manganiferous layers are particularly anomalous in metals, and thought to be seafloor exhalatives generated by submarine hydrothermal fluids. The rock types and style of mineralization are most similar to the Outokumpu and Talvivaara districts in central and eastern Finland, where Cu-Zn massive sulphide mineralization is hosted by similar lithologies.

Cross Section of the Keretti Mine, Outokumpu VMS District, Finland Ongoing study as to how shale associated, Ni-Cu-Zn-Co deposits form has led to recognition of oceanic detachment faults on the modern day ocean floor that have focused large volumes of black smoker fluids along an ultramafic – volcanic (or sediment) contact. This results in metasomatic alteration of ultramafics to talc-tremolite-chlorite schists along the fault. By this process, distal venting of Ni-rich fluids can form “VMS” deposits far from a spreading ridge, in or under quiet basins where shales deposit. If fault involves a sedimentary package, the fluids can precipitate subsurface, within graphitic shales or sandstone, which are later deformed and metamorphosed to black schist and quartzite.

Deposit model for mineralization in the Lardeau Group. Modified from Jowitt and Keays (2012): Shale-hosted Ni-(Cu-PGE) mineralisation: A global overview.

The Lardeau property covers 6136 Ha  west of the Lardeau River, covering prospective Index and Jowett Formation rocks. The heavily vegetated area contains three B.C. RGS Ni-Co anomalies (95th percentile) and two lesser anomalies. Limited reconnaissance work along the access roads at Lardeau has identified listwanite float in the creeks with anomalous nickel silt samples. Listwanite is an alteration product of nickel-bearing ultramafic rocks, similar to the talc and actinolite schists found at Ledgend. Ultramafic rocks are also associated with the massive sulphides at the Standard showing. Most of the creeks are perpendicular to the dominant northwest trend of the geology and are ideal for detailed (200m spaced) silt sampling.

Cardero collected 126 silt samples at approximately 200-metre spacing from the numerous small creeks which cut across the regional geological trend in the fall of 2017. Three drainages (Deep, Deception, and Mat creeks) returned highly anomalous Ni (>100 ppm), Co (>30 ppm) and Cu (>50 ppm) values, over up to three kilometres of their length.

Cardero intends to fly a helicopter-borne aeromagnetic survey over the Lardeau claim. Base metal mineralization is expected to be associated with pyrrhotite, which has a strong magnetic signature. New logging roads are also planned for this area and will aid in access for prospecting and geochemical sampling. 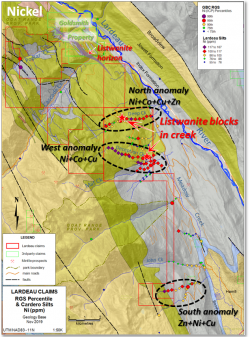 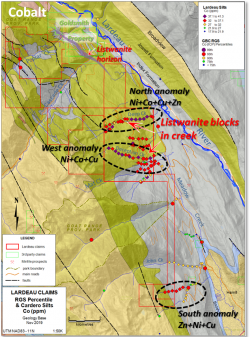 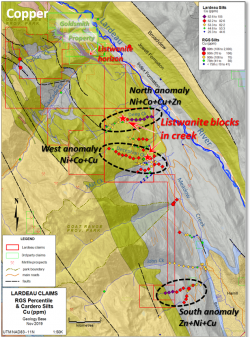 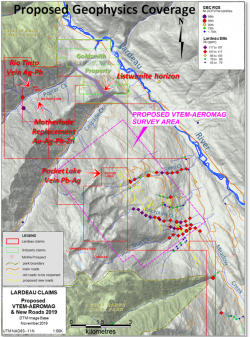 The option agreement applies to the Kootenay Project, comprising claims totaling 7864 hectares. The underlying owners are Crockite Resources Ltd. and Dawson Geological Consultants Ltd., both corporations at arm’s length to the Company.  Wealth has been granted the exclusive option to acquire a 100% interest in the Kootenay Project by issuing an aggregate of 3,000,000 common shares and CAD$1,000,000 over a four-year term, the details of which are as follows:

All of the claims are subject to a 2% net smelter return royalty. Wealth will have the right to purchase ½ of the royalty applicable to the Kootenay Project for a payment of CAD$1,500,000 in cash at any time following the date that Wealth exercises its right to acquire the properties. 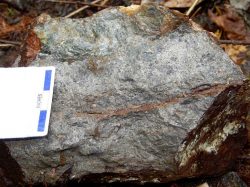 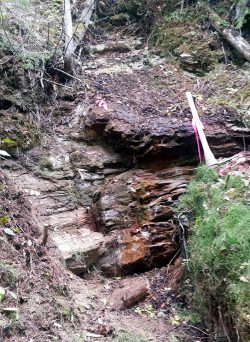 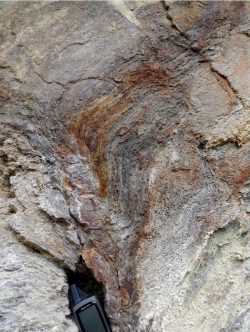